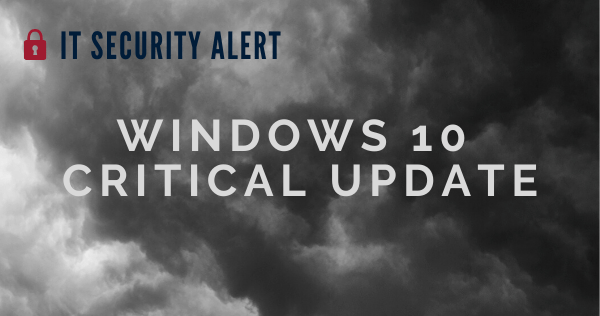 A critical security update was released by Microsoft on Tuesday Jan 14th. This update addresses a security vulnerability that impacts workstations and laptops running Windows 10 as well as servers running Windows 2016/2019.

The NSA discovered this potential vulnerability and informed Microsoft of the issue because of its wide potential impact. Per Microsoft, “This vulnerability is one example of our partnership with the security research community where a vulnerability was privately disclosed and an update released to ensure customers were not put at risk.”

The good news is that if you are signed up for our SRP plans at Seitel Systems, you’re already protected. There’s no need to worry because all of the associated security patches were approved and took place as part of your regular patching schedule. If you’ve subscribed to one of our SRP plans, you’re covered for this and future updates. Yet another reason why choosing us for your IT partner makes your life easier, we take care of these important tasks for you (in most cases, before it ever even hits the news 😉), so that you can focus on running your business.

If you’re not a Seitel Systems SRP client, make sure that you get these updates installed as soon as possible either through an automated update or by manually updating your systems.  And if your system prompts you to run an update, make sure you allow it to run. Anyone out there who doesn’t have allow this update to run could find themselves exposed.

We also point out that this update coincided with Microsoft’s end-of-support for Windows 7 and Server 2008.  This means that Microsoft will not be issuing any security fixes for these operating systems, so as new vulnerabilities are discovered these platforms will grow increasingly defenseless.  If you’re still running Windows 7 or Server 2008 in your environment, you’re doing it wrong. It’s time to contact your IT partner – hopefully Seitel Systems – to arrange for a migration off these operating systems as soon as time permits.

Where to find us: